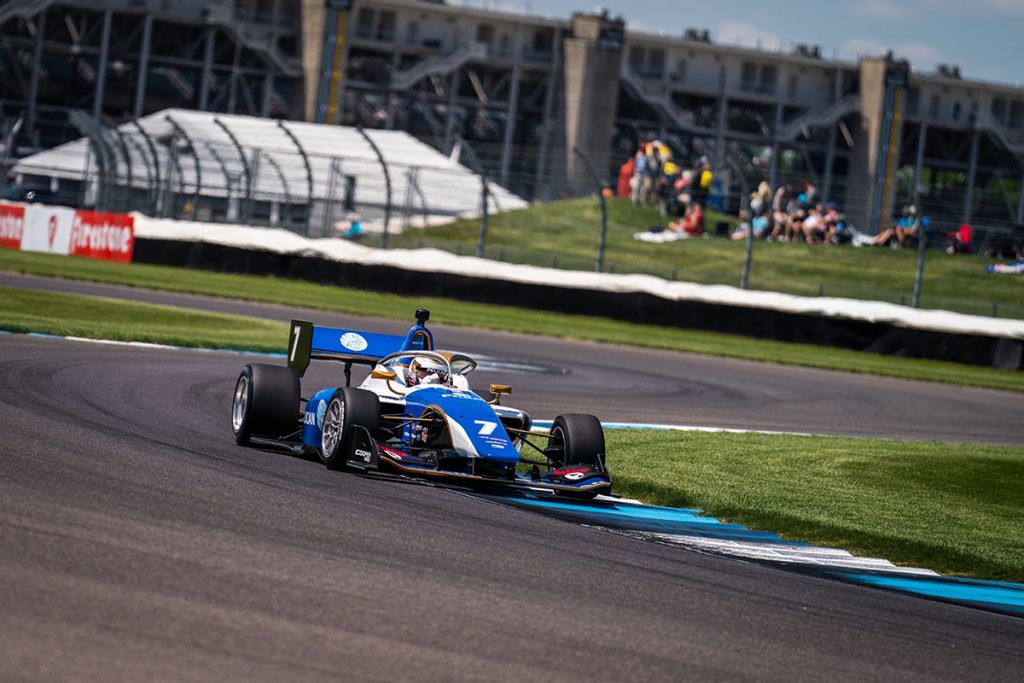 This past weekend, Christian Bogle and HMD Motorsports with Dale Coyne Racing entered the first double-header race weekend of the 2022 Indy Lights Presented by Cooper Tires Championship season. Taking place on the 14-turn road course at Indianapolis Motor Speedway, Bogle and team prepared for the third and fourth rounds of the fourteen-round season.

Prior to the weekend, Bogle took part in a series test at IMS in preparation for the event. With limited track time available over the two days, drivers were given one forty-five-minute practice session on Friday before heading straight in to qualifying and race one later that day followed by race two on Saturday afternoon. Bogle finished the practice session in tenth, a great start to his weekend.

Qualifying for both races took place in one thirty-minute session, where drivers fastest lap set their position for race one and their second fastest lap determined their starting position for race two. With lap times consistent at the end of the session, the grid remained relatively unchanged, and Bogle qualified eleventh for both wheel-to-wheel races.

On Friday afternoon, Bogle had one of his best starts to date, driving up two positions into ninth in the opening four laps of the race.  On lap five, as a caution came out, Bogle moved up to seventh. Over the next five laps, Bogle continued to match the pace of the drivers around him, battling and passing for sixth for a couple of laps. Running as high as fifth, the #7 machine ultimately ended the race in seventh – matching his best career result in Indy Lights over the past two seasons.

Sunday proved to be a challenging day for multiple drivers throughout the field. With race two starting in sunny conditions, Bogle spent the first twelve laps swapping positions just inside the top-ten. On lap thirteen however, the race stewards called a caution – and ultimate red flag one lap later – as storms began to roll in. To keep the NTT INDYCAR SERIES on schedule, the Indy Lights race was set to resume at the conclusion of the GMR Grand Prix. After over six hours of waiting, the Indy Lights field took the green flag for a second time to finish the race. While the storm clouds and rain had passed, the track surface was still coated in standing water and was a challenge for many drivers, including Bogle. On the opening lap of the restart, Bogle spun into the gravel as a caution came out. After being pulled from the gravel, Bogle was able to continue and finish the race in fourteenth all while gaining wet weather experience and learning for the future.

“It was a good weekend and to match my career best finish in only my third event weekend with the team is awesome,” explained Bogle. “I have a lot to learn in the rain, but I am building more and more confidence with each passing event. Looking forward to Detroit.”

In the two days at Indianapolis Motor Speedway, Bogle showed that he can battle for positions and match the speeds of other drivers in the field after matching his career-best finish and was also able to gain valuable experience driving on a continually changing track in wet conditions.

The Indy Lights field will be back on track for another double-header weekend in three weeks’ time at The Raceway at Belle Isle Park in Detroit, Michigan, June 3-5.