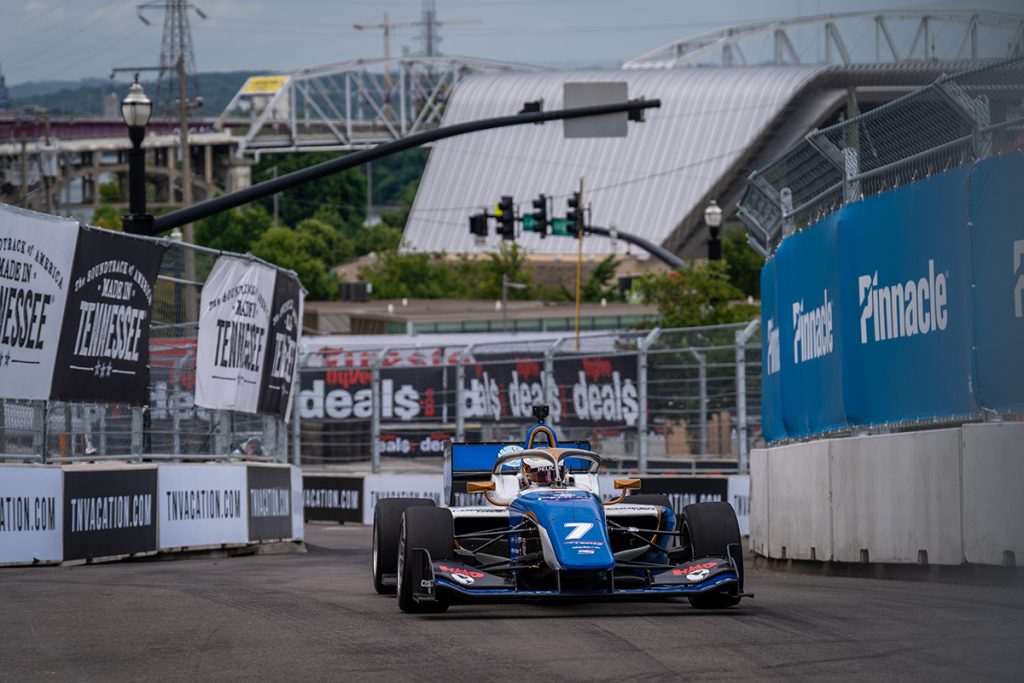 Wrapping up their final street race of the season, Indy Lights Presented by Cooper Tires took on the inaugural Music City Grand Prix this past weekend in the streets of Nashville, Tennessee. While street courses can often pose a challenge to drivers, Christian Bogle of HMD Motorsports with Dale Coyne Racing had another strong result.

In the opening two practice sessions on Friday and Saturday, Bogle rounded out the top-ten with tenth and ninth place finishing positions. On a course that hosted numerous spins and crashes from the other Indy Lights drivers, Bogle remained steady on the course as he continued to cleanly lap the circuit throughout the weekend.

After a lightning delay disrupted the schedule on Saturday, Indy Lights qualifying was eventually canceled. The grid for Sunday’s race was then set by entrant points, resulting in an eleventh place starting position for Bogle.

“Not the way we wanted to set the grid at all,” expressed Bogle. “I think we had good pace and were trending in the right direction to qualify well inside the top-ten. To have our session canceled yet every other session run either on a slight delay or just on time is a gut punch, but we will take it all in stride and continue to push forward.”

In Sunday morning’s 35-lap race, Bogle had yet another nearly clean drive around the 11-turn street circuit through the streets of downtown Nashville. After falling to the back of the field at the start of the race after a miscue that saw him in the runoff area, the driver of the #7 Pelican Energy Consulting machine kept his head down and continued to chase down the field. By lap seven, Bogle had returned to his eleventh place starting position. In the final 15 laps of the race, drivers began making mistakes as heat and aggression took their toll, but Bogle remained steady and moved into the top-ten. In the final two laps of the race, Bogle moved up three additional positions to finish the Indy Lights Music City Grand Prix in seventh.

While many drivers crashed ahead of him throughout the race, Bogle kept his HMD Motorsports with Dale Coyne Racing car out of trouble and ended the race as the most improved driver after gaining four positions. After Sunday’s race, Bogle gained two positions in the Drivers’ Championship, breaking into the top-ten with four races remaining.

Later this week, Christian Bogle will test with HMD Motorsports in a series test at World Wide Technology Raceway in preparation for the final oval race of the season in two weeks’ time.