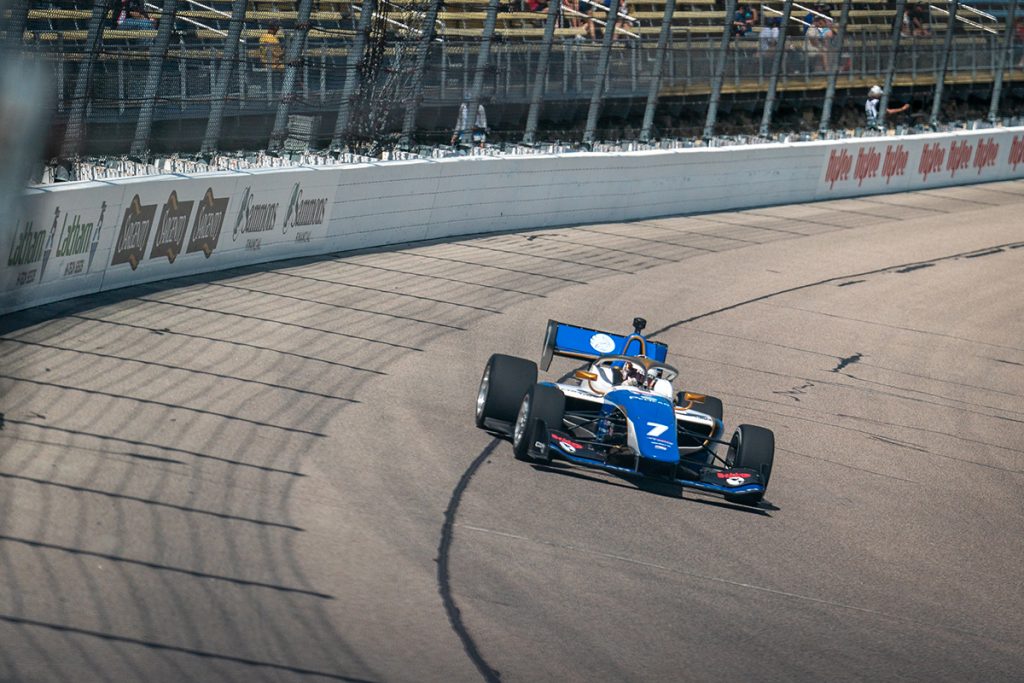 The first of two oval races of the Indy Lights Presented by Cooper Tires season took place this past weekend at Iowa Speedway as part of the NTT INDYCAR SERIES double-header weekend. Racing in front of a sold-out crowd on Saturday, Christian Bogle had his strongest weekend on an oval to date.

In previous oval track events over the years, Bogle struggled to find speed and had not finished any previous left turn only events on the lead lap. This year, Bogle’s focus and determination to improve was evident at Iowa Speedway. Prior to the weekend, HMD Motorsports was able to complete a test day at the track in preparation for this past weekend’s event.

After not being on the Indy Lights schedule since 2018, drivers were faced with a new track heading into the weekend. After quickly getting up to speed on Friday, Bogle finished the only practice session in ninth, only 0.269-seconds behind the leader. The next morning in qualifying, Bogle again improved resulting in a seventh place starting position as he would roll off the grid on the inside of row four.

With the NTT INDYCAR SERIES completing their only double-header of the season, Indy Lights was set to race on Saturday afternoon, just ahead of the sold-out Tim McGraw concert and the 250-lap INDYCAR race. At Bogle’s last visit to an oval, he finished one and two laps down in the two races, but this weekend he fought hard the entire 75-lap race to finish on the lead lap in tenth.

“It was a great qualifying effort, and our pace was good,” explained Bogle. “I had some wheel spin on the initial start and lost a few positions and struggled on the restart after the yellow flag. If I had to pick one part of the weekend that put us behind, it was the starts and restarts for sure so I will focus on improving that in St. Louis.”

After showing great improvement when it comes to oval racing, both Christian Bogle and HMD Motorsports with Dale Coyne Racing are excited for the next oval event at World Wide Technology Raceway next month.

Indy Lights will return to the racing circuit for round ten of the Championship in two weeks at the Streets of Nashville. After a successful debut event weekend for the NTT INDYCAR SERIES at the Music City Grand Prix in 2021, Indy Lights was added to the 2022 schedule. As a new venue for the series, Bogle is eager to take on the challenge of a new street circuit.